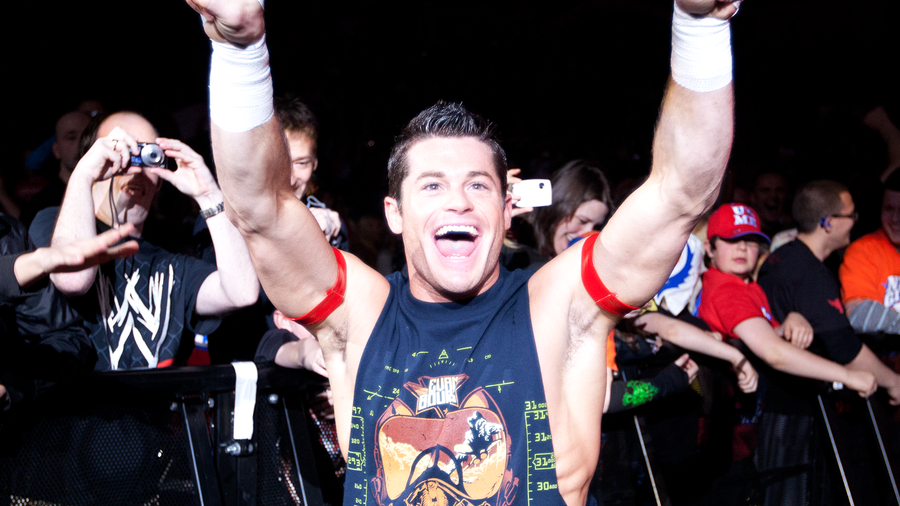 Don't let all his boyish smiles and peace signs cloud your judgment. Next thing you know, Evan Bourne was executing a Shooting Star Press off a ladder – from just above those clouds – right onto your face.

"Air Bourne," as he called the move, was perhaps the most breathtaking aerial assault in WWE, but it was far from the only trick in the high-flyer's arsenal. Bourne proved time and time again that he was willing to throw caution to the wind, especially when opponents least expected it. When you look like a happy-go-lucky sprout in a land of snarling giants, extreme measures needed to be taken.

Leave it to the hardcore faithful, then, to be the first to embrace Bourne in his WWE debut. The electric youngster dazzled ECW crowds in 2008 and 2009 and proved he wasn't afraid of taking on much bigger combatants like Mike Knox. It didn't take him long to win over the WWE Universe, either, as he took home a Slammy Award for "Best Finishing Maneuver" in his rookie year.

Raw viewers who watched Bourne team up with Rey Mysterio in 2008 were no doubt drawing some comparisons. That's because Mysterio, another acrobat who's more dangerous than his size indicates, had long been one of the blossoming Superstar's idols.

Over the years, Bourne continued to play the role of David in bouts against Goliaths with matches against Sheamus and Jack Swagger, whom he defeated at WWE Capitol Punishment in 2011. But the contests that truly showcased Bourne's action-packed style were Money in the Bank Ladder Matches, one of which took place on The Grandest Stage of Them All.

Teaming up with fellow high-adrenaline Superstar, Kofi Kingston, wound up being his most spectacular move yet. The dynamic duo known as Air Boom won the WWE Tag Team Titles on the Aug. 22, 2011 edition of Raw, and launched Bourne to championship heights.