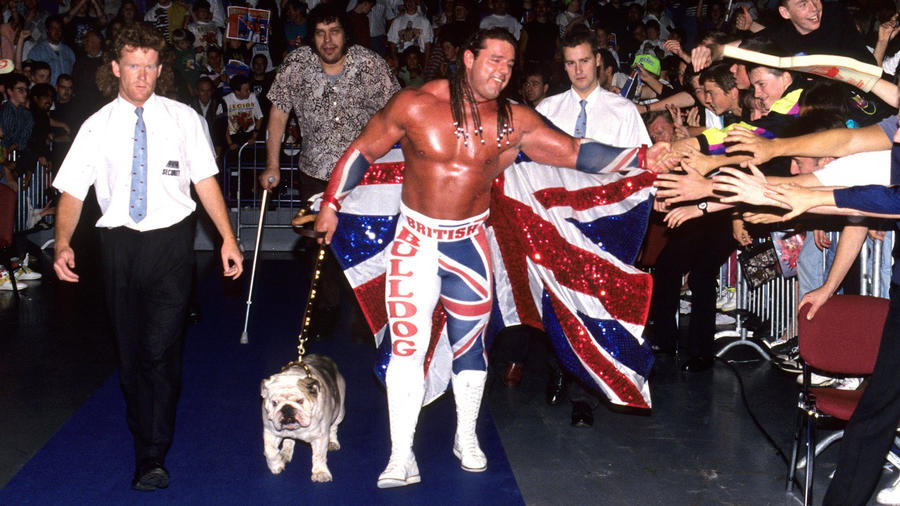 One of the most rugged and physically powerful Superstars in WWE history, "The British Bulldog" Davey Boy Smith began his career in sports entertainment as a skinny teenager in England. Competing alongside his cousin, Dynamite Kid, and other major European grapplers like Finlay, Smith quickly developed a reputation as an explosive young competitor and caught the attention of legendary trainer and promoter Stu Hart. The WWE Hall of Famer invited Smith and Dynamite to his Calgary-based Stampede Wrestling promotion in the early '80s where the two continued to hone their skills as both rivals and partners.

Known as The British Bulldogs, the duo clicked as a tag team and soon joined up with WWE. Now accompanied by an actual English bulldog named Matilda, The Bulldogs thrilled audiences with their exciting matches against the team of Bret "Hit Man" Hart & Jim "The Anvil" Neidhart. Their crowning moment, however, occured at WrestleMania 2 when they defeated Greg "The Hammer" Valentine & Brutus "The Barber" Beefcake for the World Tag Team Championship. This major event was made even more significant by the presence of legendary rock star Ozzy Osbourne in the Bulldogs' corner.

The team would hold the titles for nearly a year before leaving WWE to compete in Japan in the mid-80s. After years together, the duo eventually split with Smith returning to WWE on his own in 1990. Sporting a more muscular build and a long, braided hairstyle, the Bulldog became a major singles star and achieved the biggest moment of his career when he defeated Bret Hart for the Intercontinental Championship at SummerSlam 1992 in front of over 80,000 people at London's Wembley Stadium.

Smith spent the remainder of his career competing in both WCW and WWE. As a tag team performer, Bulldog teamed with the likes of Lex Luger, Jim "The Anvil" Neidhart and Owen Hart, winning the World Tag Team Champions with Owen in 1996. As a singles competitor, he held the European and Hardcore Championships and engaged in memorable rivalries with The Rock and Stone Cold Steve Austin, amongst many others.

The British Bulldog passed away on May 18, 2002, but his legacy lives on today.