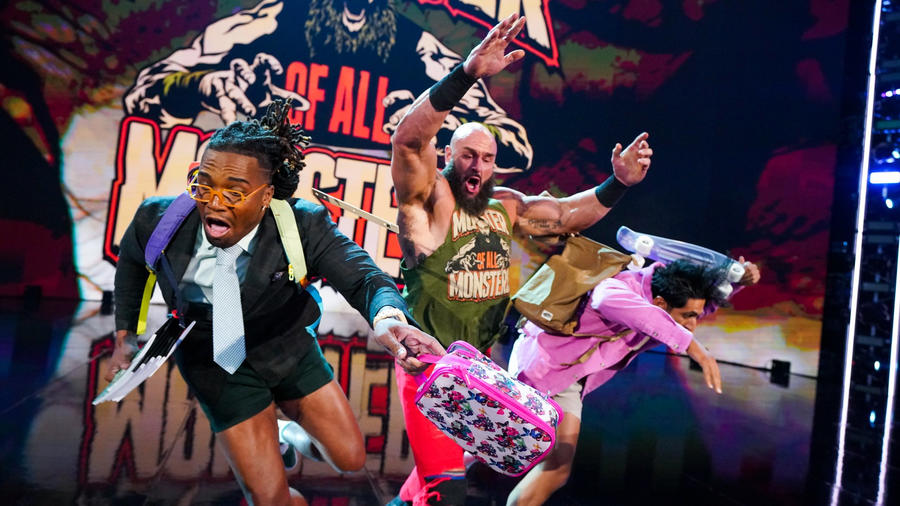 With his towering frame and intimidating aura, the monstrous Braun Strowman could strike fear into his opponents all on his own. Add his being led by the maniacal Bray Wyatt and you have as imposing a Superstar as anyone could imagine.

Strowman debuted the night after SummerSlam 2015 on Raw, coming to the aid of his leader Wyatt and Luke Harper to decimate Roman Reigns and Dean Ambrose. The New Face of Fear declared Strowman, sporting a black sheep’s mask, as his newest follower and the “Black Sheep” of Sister Abigail.

In the weeks following Strowman’s haunting debut, the Superstar proved to be an absolute wrecking ball, annihilating any and all that crossed he and The Wyatt Family’s path. Strowman continued that streak of annihilation at Night of Champions when he, Harper and Wyatt defeated  Roman Reigns, Dean Ambrose and their mystery partner, Chris Jericho, in a Six-Man Tag Team Match. However, the next night on Raw, the turf war between the two sides continued when Randy Orton returned  to join by the side of Ambrose and Reigns to combat Wyatt, Harper and Strowman.

Strowman has proven to be an x-factor in The Wyatt Family's battles, as few have been able to topple the mountain of a man. It was partly because of the intense Strowman that The Wyatts were able to demolish the extreme quartet of The Dudley Boyz, Tommy Dreamer & Rhyno in an 8-Man Elimination Tables Match at WWE TLC.

In the 2016 Royal Rumble Match, Strowman made a strong showing, eliminating both Big Show and Demon Kane. And in spite of being eliminated, he helped Bray Wyatt launch an attack on Brock Lesnar that would eventually get The Beast Incarnate thrown over the top rope.

It remains to be seen if anyone can stop The New Face of Destruction, but one thing is for sure: Until proven otherwise, he strengthens The Eater of Worlds’ reign of terror to a frightening degree.