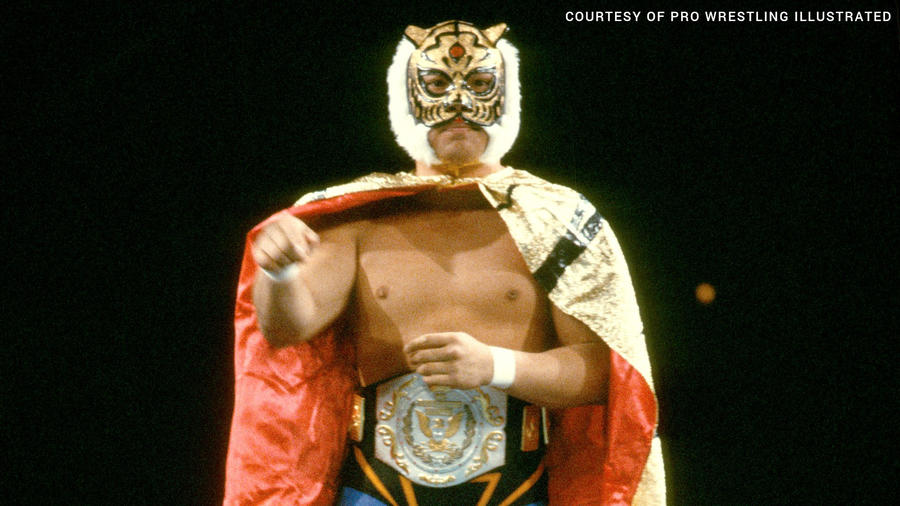 It would be difficult to overstate the influence of the original Tiger Mask. In the early 1980s, when the masked highflier from Japan made his name as the world’s finest junior heavyweight, watching one of his matches was like looking into the future of professional wrestling. At a time when most Superstars were glued firmly to the mat, Tiger Mask took to the sky, busting out Space Flying Tiger Drops and twisting moonsaults that left opponents — and announcers — completely baffled.

If Tiger Mask’s offense was ahead of its time, his mythos was rooted firmly in the past. When he first debuted in New Japan Pro Wrestling on April 23, 1981, his royal blue tights and distinctive mask were immediately recognized as the trademarks of a hero from a lively 1960s cartoon. The anime — which told the story of a heroic professional wrestler who supports a children’s hospital while battling a villainous cadre known as the Tiger Cave — had been licensed by New Japan executives who were trying to grow interest in their budding junior heavyweight division.

The character’s journey from two-dimensional animation cels to the real world may have been an awkward one were it not for Satoru Sayama. A former student of WWE Hall of Famer Antonio Inoki and Karl Gotch, the 23-year-old had experienced modest success in Mexico and England under the name Sammy Lee. But the moment Sayama donned the striped hood — whiskers and all — to defeat The Dynamite Kid in his debut match, he turned Tiger Mask into something much more than a cartoon come to life.

Over the next two years, Tiger Mask would distinguish himself as not only the top junior heavyweight in New Japan, but in the entire world. On Jan. 1, 1982, he officially staked that claim by winning the WWE Junior Heavyweight Championship — which had made an unexpected journey from New York to Japan around the waist of Tatsumi Fujinami — with another triumph over The Dynamite Kid. The rough Brit became Tiger Mask’s top rival and the two men pushed each other to the limit in matches that are just as exhilarating today as they were in the days of VHS.

WWE brought Tiger Mask to America in winter 1982, where he battled future stars like Eddie Gilbert and Curt Hennig from the majestic Madison Square Garden to obscure corners of the northeast like Belleville, N.J. Back in Japan, he continued to thrill against rivals like The Dynamite Kid and Black Tiger — another character from the “Tiger Mask” series — while innovating maneuvers like Rey Mysterio’s 619 (known in some circles as the Tiger Feint Kick) and the Tiger Suplex.

Sayama disowned the Tiger Mask persona in 1984, but the character endures to this day. After first being adopted by the legendary Mitsuharu Misawa, the cartoon hero has remained a constant presence in the rings of Japan, with a fifth competitor wearing the hood today. Still, no version of Tiger Mask — and very few junior heavyweights — had the cultural and professional impact of Satoru Sayama.