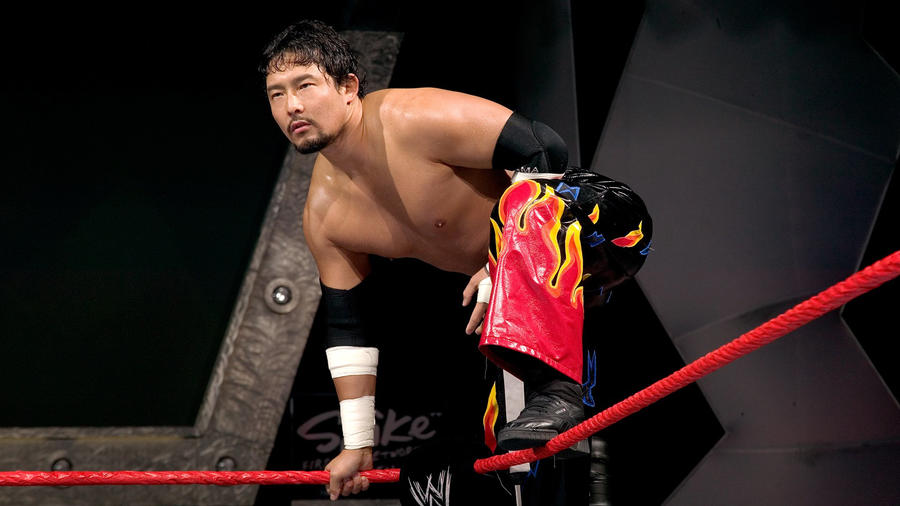 Whether as a gleefully sadistic martial arts maestro or a comedic sidekick, Yoshihiro Tajiri was one of WWE's most versatile Superstars.

Trained in lucha libre and Japanese styles of wrestling, Tajiri first made an impact on U.S. shores when debuted in Extreme Championship Wrestling in late 1998. Clad in traditional blue and white tights with an insignia of Japan's rising sun, he initially could have passed as an Asian Bob Backlund, circa 1970s and ‘80s, in his appearance. But there was nothing plain about Tajiri's repertoire. Fans immediately knew he was something special.

Tajiri reminded observers of The Great Muta with his vicious roundhouse kicks, moonsaults, corkscrew elbow drops, Tarantula Boston Crabs in the ropes and flying somersault elbows in the corner. Soon after his ECW debut, Tajiri grew a goatee, started wearing long ninja pants and spewing green mist. His transformation was complete -- he was no longer just Yoshiro Tajiri, he was "The Japanese Buzzsaw."

Tajiri was a force to be reckoned with in ECW. His high-flying rivalry with Mexico's Super Crazy (then referred to as "The Extreme Luchador") was legendary and thrilled fans in the United States and around the world. He also had memorable wars with Little Guido and Jerry Lynn and once challenged Tazz for the ECW World Championship. Despite never winning ECW's World Championship, Tajiri held the Philadelphia promotion's Tag Team and Television Championships.

After ECW closed in 2001, Tajiri signed with WWE. He debuted in May 2001 and provided fans with comedy relief as William Regal's assistant when the British Superstar was commissioner of WWE. But he also struck fear in the hearts of WWE competitors with his arsenal of weapons in the ring and penchant for spewing mysterious red, green or black mists into the eyes of his opponents. He battled both Billy Kidman and Rey Mysterio over the Cruiserweight Championship, winning the championship on three separate occasions. Tajiri also won the Light Heavyweight Championship and United States Championship from X-Pac and Chris Kanyon respectively and held the WWE Tag Team Championship and World Tag Team Championships with Eddie Guerrero and Regal.

Tajiri officially left WWE in December 2005. He last appeared on WWE programming in a tag team match with Super Crazy against the F.B.I. in ECW One Night Stand in June 2006. Who knows if we'll see Tajiri reemerge again in WWE or ECW, but fans will always fondly remember "The Japanese Buzzsaw."