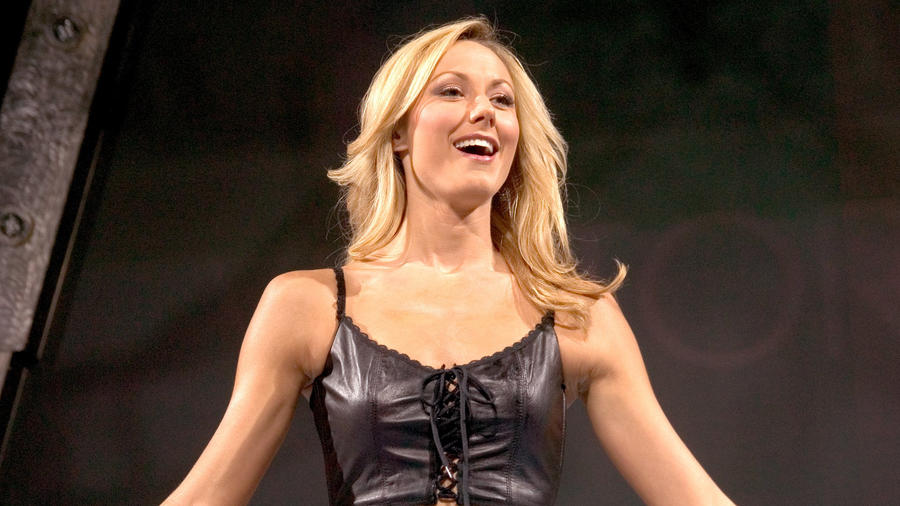 Yes, and yes. Those are the answers, assuming the questions are “Is Stacy Keibler one of the most gorgeous Divas of all time?” and, “Do they go all the way up?”

First strutting onto the sports-entertainment scene after winning WCW’s nationwide search for a new Nitro Girl, Keibler used her 42” stems to kick open that door of opportunity and become one of the most admired talents in WCW before it was purchased in 2001 by Mr. McMahon.

Upon arriving in WWE, Keibler brought her leggy brand of distraction to a new level, joining the WCW/ECW Alliance and managing The Dudley Boyz to the top of the tag ranks in 2001. Keibler even seduced The Chairman himself by dancing on his desk mid-ring to earn the title of his “executive assistant.”

Although WWE fans preferred to imagine her as a lover, not a fighter, Stacy’s in-ring career spans a scattered half-decade with memorable matches against Trish Stratus, Victoria, and Molly Holly. Not surprisingly, Keibler used her long legs to boot more than a few Divas out of her way.

In early 2006, Keibler’s star went supernova when an appearance — and eventual third-place finish — on the second season of “Dancing with the Stars” introduced her to millions upon millions of living rooms across America. After achieving the season’s first perfect score (she would go on to receive a record four more), Stacy received the nickname “The Weapon of Mass Seduction” from judge Bruno Tonioli. Boom.

Following roles on television shows like “Chuck” and “Pysch,” Keibler made entertainment headlines as the galpal of George Clooney, giving jealous fans that paid to see “Batman and Robin” another reason to curse him.