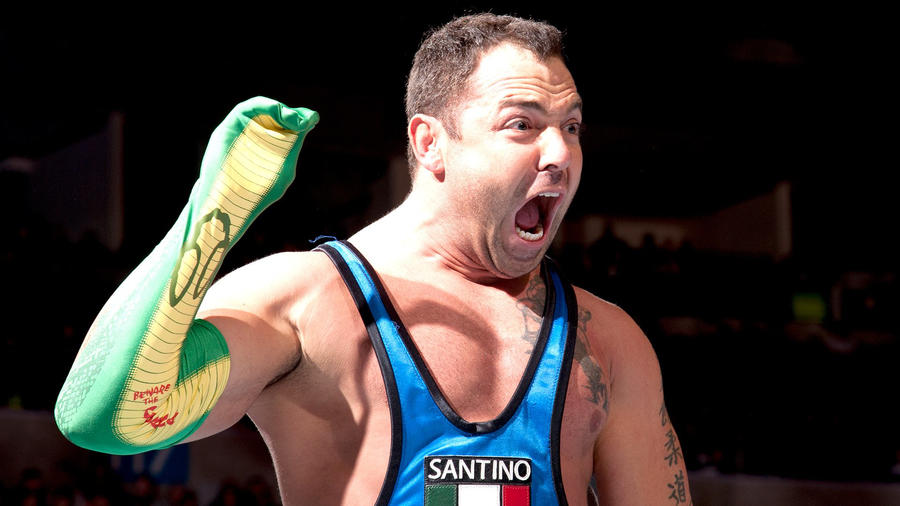 Don’t believe in miracles? Try telling that to Santino Marella, the recipient of the divine intervention that transpired in Milan on April 16, 2007. During Raw’s first-ever broadcast in Italy, Marella was a young fan in the front row who not only accepted Mr. McMahon’s open challenge to face the nigh-unstoppable Umaga, but inexplicably defeated The Samoan Bulldozer for the Intercontinental Championship.

Initially, many believed this Italian braggadocio’s stay in WWE had the lasting power of an all-froth cappuccino — offering subtle hints of finely ground flavor, though ultimately providing a tasteless imbalance of foam and espresso. But Santino Marella is no stale cannoli. In fact, he has made a career out of improbable moments that have been savored to the delight of the WWE Universe. He’s captured the attention of more than a few Divas (even before he shaved his unibrow), as well as his share of championships, both as an individual and a tag partner. He had the fastest elimination in 2009’s Royal Rumble (1.9 seconds in 2009) — a feat that only he could dare claim as a badge of honor. And if you think he’s the only successful Marella in his family, bear in mind that his “twin sister” Santina is a former “Miss WrestleMania.”

Yes, Santino Marella’s time in WWE has been nothing if not unique — and certainly not without its share of success. In addition to his Intercontinental Title reign, Marella also laid claim to the United States Championship in March 2012. His championship run came to a crashing halt against Antonio Cesaro at The 25th Anniversary of SummerSlam, but the Italian rapscallion can still boast about having the eighth-longest reign since the title was reinstated by WWE in 2003.

Following a stint on the shelf due to injury, Santino made a triumphant return to Raw on Sept. 9, 2013, defeating old foe Cesaro in a one-on-one bout that brought the crowd to its feet. However, The Italian Stallion’s momentum suffered a setback at WWE Battleground, where he and The Great Khali fell to The Real Americans in tag team action.

As the calendar year changed, a leaner, (not really) meaner Santino emerged. Recently, Marella has spent a lot of time with Emma, with whom the Italian Superstar seems to be smitten.

The WWE Universe already knows full well that this lovable Italian is a gifted competitor and a true showman. Whether he’s in the ring competing, on the mic butchering the English language or trumpeting his invisible brass band in celebration, the WWE Universe knows that it’s going to be entertained.