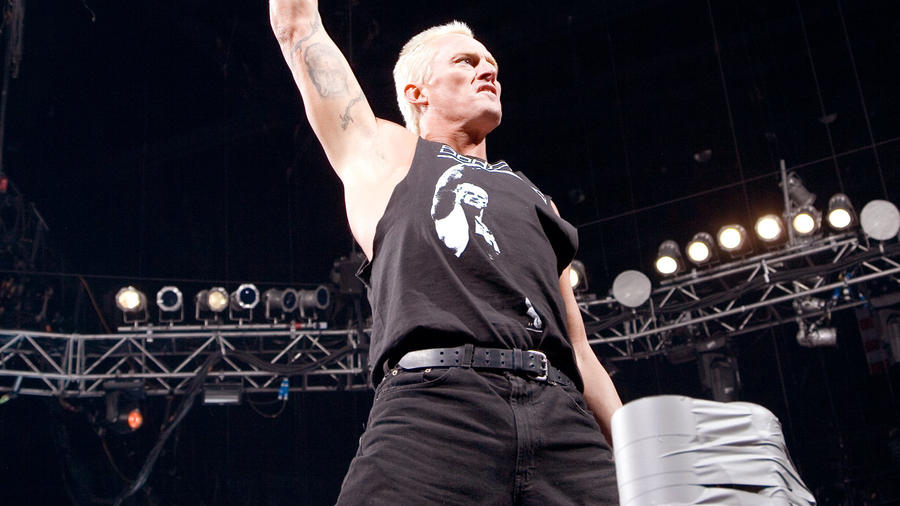 Before “Stone Cold” Steve Austin cracked open his first “Steveweiser,” ECW's The Sandman was sports-entertainment's original beer-swilling Hardcore Icon. As Metallica blared through the arena, the blue-collar brawler from Philadelphia's mean streets would make his way to the ring among the ECW faithful. Sharing some brewskis with the crowd, Sandman sprayed his beverage of choice all over the cheering Extreme fans and repeatedly smashed the can against his forehead, choosing to bleed on his own before the bell had even rung.

The Sandman's matches were often far more brief than his spectacular entrances. Although his bouts were sometimes secondary, ECW owner Paul Heyman famously referred to him as “the embodiment of Extreme Championship Wrestling.”

Mr. Sandman, as he was first known, arrived in Eastern Championship Wrestling in 1992, and won the first of his record five ECW World Titles by defeating the legendary Don Muraco in November 1992. The following year, he dropped the “Mr.” from his name and began carrying around a Singapore cane, which became symbolic of The Sandman's persona for the rest of his career. As part of the organization's rebirth as Extreme Championship Wrestling, The Sandman engaged in a bitter rivalry with Tommy Dreamer that resulted in the cane-swinging competitor being blinded in the eye by a cigarette.

In April 1995, The Sandman won his second ECW Championship by defeating fellow Extreme pioneer Shane Douglas. The brawler had a series of brutal matches throughout the year with Cactus Jack before losing the title to Mikey Whipwreck in October. But The Hardcore Icon became ECW’s first three-time champion only two months later in a Three-Way Dance that also included future fellow beer drinker Austin.

In 1996, The Sandman became embroiled in one of the most emotional rivalries in sports-entertainment's history. He lost the ECW Championship to Raven in January and the grungy leader of The Nest brainwashed Sandman's own wife and his son, Tyler, into worshipping him. The Sandman eventually reunited with his son and finally regained the ECW Championship by defeating Nest members Stevie Richards & Brian Lee, who were defending the title on behalf of Raven, in a tag team match.

After a brief tenure in WCW — where he was known as Hardcore Hak — The Sandman returned home to ECW. He won his fifth and final ECW Championship in a Three-Way Tables, Ladders, Chairs and Canes Match against Steve Corino and Justin Credible at Guilty as Charged 2001. Immediately after the victory at New York City’s famed Hammerstein Ballroom, Sandman lost the title to Rhyno, and the event became ECW's final pay-per-view.

Nearly 15 years into his career, The Sandman became an official member of the WWE roster when ECW was relaunched in 2006. He was victorious in his WrestleMania debut with his fellow ECW Originals and defeated the likes of Matt Striker, Santino Marella and Big Show over the next several months.

One of the ring's most unique World Champions, The Sandman wasn't about wrestling a technical classic each night. But it didn't matter. As Heyman once said, “He was just a tough guy looking for a fight. And people loved him.”