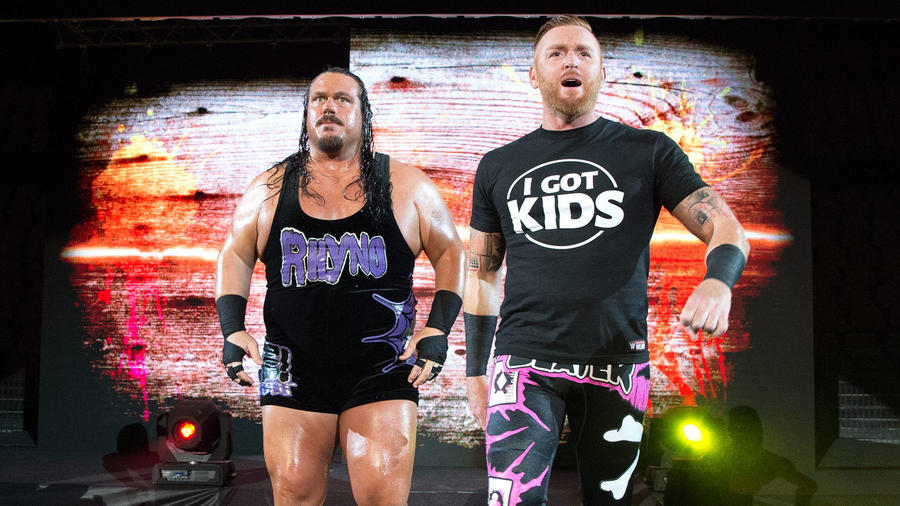 Built as tough as an American-made automobile, The Man Beast from Detroit has had more than a few crash tests in the squared circle. Now, Rhyno is in WWE NXT to show he can hang with the future of WWE.

Rhyno began his career wrestling for small companies in Canada where he became close friends with future ring allies Christian and WWE Hall of Famer Edge, but he first rose to national prominence in the original incarnation of Extreme Championship Wrestling. Debuting in mid-1999, the powerhouse took the renegade company by storm as he destroyed Extreme icons like Raven, Tommy Dreamer and The Sandman. Soon, even the highly passionate hardcore fanbase began to take notice of the devastating and impactful “GORE!”

Rhyno didn’t just defeat opponents. He ended them – barreling through his rivals like a full-steam ahead locomotive. At CyberSlam 2000, he defeated Yoshihiro Tajiri for the ECW Television Championship. Over the ensuing months, Rhyno defended his title against all-comers including Jerry Lynn, Raven, Mikey Whipwreck, New Jack, Spike Dudley and even Rob Van Dam – who had vacated the title after a 23-month reign – but all were unable to topple The Man Beast.

At ECW’s final pay-per-view, Guilty as Charged 2001, Rhyno made history. Immediately after The Sandman had won the ECW Championship in a grueling matchup, The Man Beast appeared in New York City’s Hammerstein Ballroom and pinned his rival to win the title in just one minute, becoming the first competitor to simultaneously hold ECW’s two singles championships. The company ceased operations later that month.

Rhyno kept moving, and debuted in WWE two months later. He rekindled his longtime friendships with Edge and Christian, and helped his allies win the tag titles at WrestleMania X-Seven. The trio joined with Kurt Angle to form Team RECK, and all four members advanced to the semi-finals of 2001’s King of the Ring Tournament.

Staying true to his ECW roots, Rhyno won the Hardcore Championship on three occasions early in his WWE tenure, and joined the ECW portion of The Alliance during 2001’s Invasion. When Chris Jericho made nasty remarks about Stephanie McMahon, Rhyno fought for the ECW owner’s honor, and even Gored Y2J straight through SmackDown’s set. He picked up the United States Championship from former ECW rival Tajiri, but was suspended by The Alliance authorities when he lost the title to Kurt Angle.

Rhyno’s period of destruction in WWE might have been brief, but he is known for his dedication as much as his wreckage. More than 10 years since ECW closed its doors, The Man Beast still remains true to his roots, defining the hard-nosed style that the Philadelphia-based company was known for. And Rhyno’s longtime friendships, both on-screen and off, have remained a clear indication of his loyalty – as evidenced by honoring Edge during his sudden retirement and subsequent WWE Hall of Fame induction, where he received a shout out during The Rated-R Superstar’s speech.

But when most fans see Rhyno in action, there’s only one word to shout out: “GORE!”

After nearly a decade away from WWE’s rings, The Man Beast made a surprise appearance on NXT, flattening Elias Samson with a Gore that brought the NXT Universe to its feet. The Man Beast soon set his sights on Baron Corbin, but was defeated by The Lone Wolf for a fierce battle at TakeOver: Unstoppable. The loss, paired with a defeat at the hands of Finn Bálor, sent Rhyno into a rage. The Man Beast Gored Bálor into the stage following their match, before declaring that he's here to destroy NXT.

Can the NXT roster tame The Man Beast, or will Rhyno Gore his way through the next generation of Superstars?