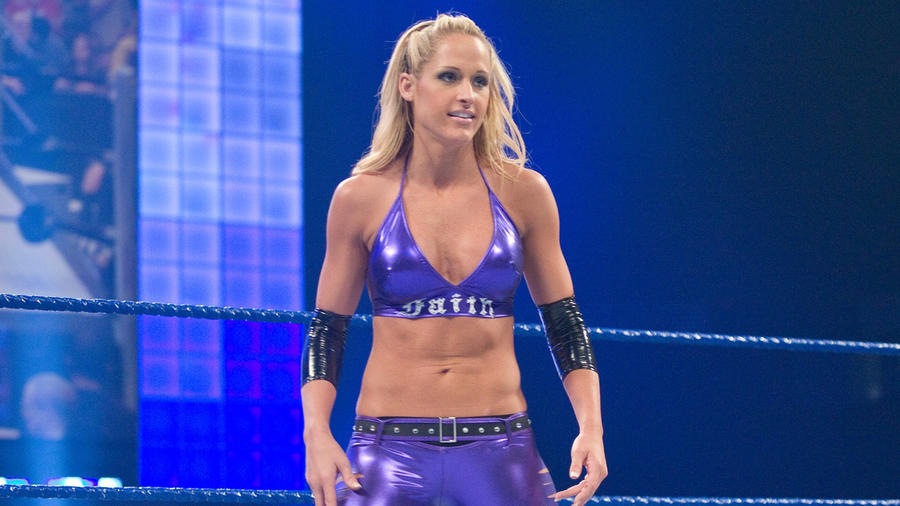 There are many words that could be used to describe Michelle McCool — aggressive, cruel, malicious. But more than any of these things, the tough-as-nails Diva was a fighter.

First introduced to the WWE Universe as a contestant in the 2004 Diva Search, McCool didn’t win the competition, but she was so dynamic that she was brought to SmackDown later that year. Her early days were unremarkable, but McCool refused to be held back, because she had struggled for too long to get where she was.

Before she ever stepped in the ring, Michelle was a teacher in Florida. She spent her days educating schoolchildren about science, but she always knew what she really wanted to do with her life. From the day she attended a WWE event with her father and grandfather when she was six years old, McCool vowed she would be a sports-entertainer. The little girl set eyes on the "American Dream" Dusty Rhodes and she was hooked.

Living by the motto "Faith to fight the good fight, heart to believe and soul to search within," McCool battled her way from Diva Search reject to the top of the division. At first wasted as the manager of a forgettable tag team known as The Teacher's Pets, McCool began to carve her own path when she set out as a singles competitor. Early matches weren't always pretty, but her perseverance paid off in July of 2008 when she defeated Natalya to become the first-ever Divas Champion.

The victory was a huge one for the Florida native and it inspired a change in her. No longer was she concerned with pleasing the fans. Instead, her main goal was to stay on top of the Divas division at any cost. It was a shocking change of personality, but a shift that brought McCool more accolades. In June of 2009, she defeated Melina at The Bash to capture the Women's Title, becoming the first competitor to win both the Divas and Women's Championship. On that night, her legacy as a historic Diva was cemented.

From there, McCool formed an alliance with the equally nasty Layla. Collectively known as Team Lay-Cool, the mean girls became the wickedest duo in WWE. Like two nasty high school students, they resorted to namecalling to belittle the other Divas in the locker room and found every way to cheat to hold on to the Divas Championship they shared.

They were evil, but effective. That was until WrestleMania XXVII when Team Lay-Cool was put in their place by "Jersey Shore" star Snooki. The loss stung and led to the eventual breakup of McCool and Layla. But insteading of ending their successful partnership on good terms, the former friends battled in a "Loser Leaves WWE" Match at Extreme Rules.

Michelle lost that match, bringing a premature end to a stellar career she'd worked so hard to attain. It was a rough way to go. After being pinned by Layla, she was brutalized in the ring by the monster known as Kharma.

That night, McCool left the WWE battered and bruised, but she didn't mind. The Diva was used to fighting.