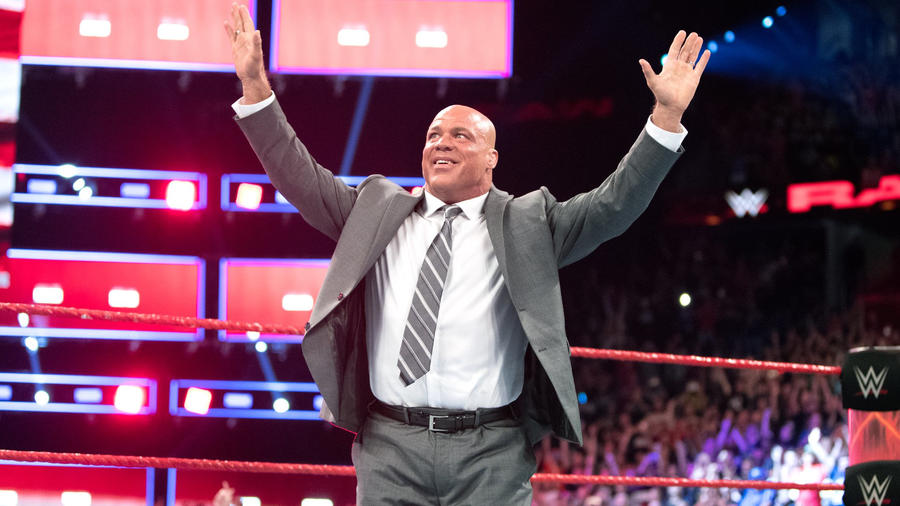 Kurt Angle’s intensity was unmatched; his technical wrestling skills unparalleled. Possessing an unprecedented competitive streak that fueled him to become a 1996 Olympic gold medalist, Angle dominated the amateur ranks before emerging as one of the most successful WWE Superstars of all time.

Starting his athletic career as a football and wrestling star in his hometown of Pittsburgh, he soon became one of the top amateur wrestlers in the entire country, winning a pair of NCAA titles at Clarion University. But Angle truly captured national attention in 1996 when he won the 220-pound freestyle wrestling competition at the Olympic Games in Atlanta with a broken neck.

His raw athleticism earned him an opportunity to try out with the NFL’s Pittsburgh Steelers, but wrestling was The Olympic Hero’s true passion.

Four years after earning Olympic gold, Angle entered WWE and immediately became one of the most competitive individuals to set foot in the squared circle. Just weeks after his debut, Angle, who preached the virtues of his three I’s (Intensity, Integrity and Intelligence), won the European Championship.

Shortly thereafter, he captured the Intercontinental Championship and was crowned as King of the Ring in 2000. With momentum propelling the red, white and blue–clad grappler to new heights, he defeated The Rock at No Mercy to win his first WWE Championship.

A true testament to Angle’s passion and fortitude came in 2003. A mere week after being defeated by Brock Lesnar for the WWE Title at WrestleMania XIX, The Olympic Hero underwent a career-threatening neck surgery. Amazingly, Angle returned a short time later and in July 2003 at Vengeance — just 14 weeks after the operation — he made Lesnar tap out, reclaiming the WWE Title.

During his tenure in WWE, The Wrestling Machine tussled with the greatest Superstars of The Attitude Era, including “Stone Cold” Steve Austin, The Rock, The Undertaker, Triple H and Big Show and even battled John Cena in the Cenation leader’s debut. But it’s the Olympic gold medalist’s WrestleMania 21 bout against Shawn Michaels that stands as not only Angle’s best match, but also maybe the best WWE match ever.

Angle left WWE in 2006, but his seven years in WWE certainly raised the level of competitiveness for the entire WWE roster and left the WWE Universe with memories of some of the greatest bouts of all time. Oh it’s true, it’s true.