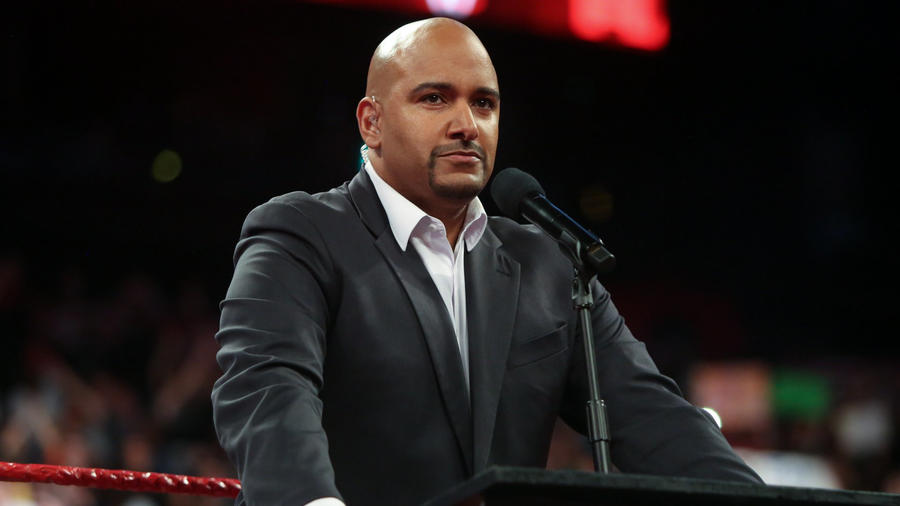 In 2008, Jonathan Coachman found himself back in a familiar spot: Behind the announcers' desk. With former color commentator JBL gone to Raw, SmackDown General Manager Vickie Guerrero introduced Coachman as Michael Cole's new broadcast partner at the beginning of the Jan. 4 Friday Night SmackDown.

Coach brings plenty of experience to the table, having been behind a WWE mic since 2000. In the early part of his WWE career, Coachman was a lovable, enthusiastic young backstage reporter who would often find a way to entertain WWE fans with his antics during interviews with Superstars such as The Rock. Later, in 2002, Coachman took on another duty in addition to his backstage interviews. He became the lead announcer on Sunday Night Heat, working with such former Superstars as Al Snow, Lita and Tommy Dreamer as his color commentator.

While The Rock would accuse Coachman of some rather lewd activities with farm animals or make him sing in front of millions of viewers, he held his ground firmly and never shied away from an interview.

Coachman's interviewing and broadcasting career took a turn during SummerSlam 2003 when he shocked everybody and sided with then-Raw General Manager Eric Bischoff over Shane McMahon. The move led to a change of attitude for Coachman and he instantly began a crusade against Jim Ross, Jerry Lawler and Stone Cold Steve Austin.

As Bischoff's and Coachman's working relationship progressed, they had their fair share of ups and downs. At Taboo Tuesday 2004, after he tried to help Bischoff out of getting his head shaved by Eugene, Mr. McMahon forced him to wear a dress for the remainder of the show. On the bright side, Coachman was rewarded with a spot in the 2005 Royal Rumble Match, where he lasted nearly 30 minutes.

In June 2005, Coachman finally achieved the goal he had been working towards since the beginning: becoming part of the RAW announce team. His earlier 2 week tenure notwithstanding, Coachman became a full-time counterpart of J.R. and The King at Vengeance, and officially became the third man in the RAW booth the next night. Around that time, Coachman slid over into the analyst role on HEAT as well, allowing Todd Grisham to take over as the play-by-play man.

That December, Coachman's years of loyalty to Eric Bischoff earned him another reward. Mr. McMahon held a trial for Eric Bischoff, and Coachman was appointed as his defense attorney. Unfortunately, Coachman's legal skills paled in comparison to his announcing, as Bischoff was fired at the end of the trial anyway.

Before 2005 ended, Coach got into the ring a few more times. He wrestled Ric Flair for the Intercontinental Championship on RAW's Holiday Tribute to the Troops, then defeated Jerry Lawler in January 2006 to qualify for the 2006 Royal Rumble Match. He was much less successful the second time around, getting eliminated by Big Show within a minute of entering the match.

He also got a new assignment in WWE, hosting a weekly WWE.com audio broadcast called CoachCast that ran from September 2005 to January 2006. In April 2006, however, Coachman was attacked by Viscera on the April 17 Raw in London, and announced on WWE.com Unlimited that he was leaving the building. He wasn't seen again for six weeks.

Memorial Day 2006, Coachman returned and was named Mr. McMahon's new Executive Assistant. It was the first time anyone had seen Coachman since his beating at the hands of Viscera. He immediately thrust himself into the new role, making a match between Edge and Big Show to determine the No. 1 Contender for the WWE Championship.

Coachman was left in charge of the June 19 Raw, while Stephanie gave birth to Mr. McMahon's first granddaughter, but his first big task under Mr. McMahon was a disaster. The reunited D-Generation X ended up humiliating Coachman and the Spirit Squad, with the Executive Assistant getting his head put through a wall. To add insult to injury, DX then pulled down his pants.

Still, Coachman continued to faithfully support Mr. McMahon. During his tenure as Executive Assistant, he also resumed his duties on WWE.com Heat - this time beside Todd Grisham as Color Commentator. After spending some time as Interim GM of Raw in mid-2006, Coachman returned to the Executive Assistant role later that year when William Regal was named General Manager of Raw.

Even with all that on Coach's plate, WWE isn't the only place he plies his trade. In the fall of 2005, Coachman also branched out into the world of sports broadcasting, calling several NCAA football games for College Sports Television. His work was good enough for CSTV to sign him on to call some college basketball games for CSTV during the 2005-06 season as well. In 2007, he also began working as a host for the Madison Square Garden network. Coachman spent several years in sports television prior to entering WWE, making his foray into that world a little bit easier than expected.