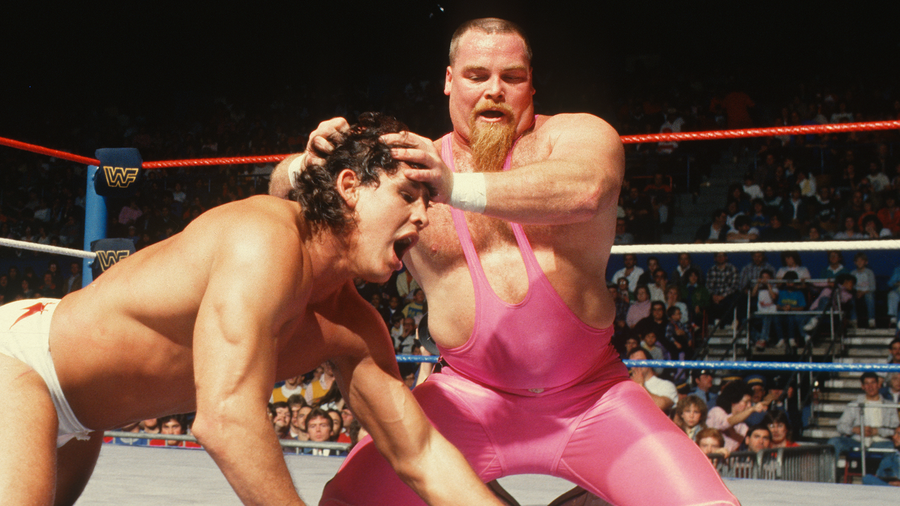 Best known as the explosive powerhouse of the legendary Hart Foundation, Jim Neidhart began his athletic career as a standout shot putter in high school. The big man held the California state record in the event for more than a decade before turning his attention to the gridiron. After playing professional football with the Oakland Raiders and Dallas Cowboys, Neidhart decided to travel to Calgary, Alberta, to pursue a career in pro wrestling.

Training in the legendary Hart Dungeon with WWE Hall of Famer Stu Hart, the mighty Neidhart learned how to put his athleticism and strength to good use in the ring. During the early '80s, he competed throughout North America, primarily in Stu Hart's Calgary Stampede promotion, and developed a reputation as a dangerous man with a wild personality. It was during this time that he earned his nickname, The Anvil, after winning $500 in an anvil throwing contest.

Neidhart would go on to marry Stu's daughter, Ellie, before making the move to WWE along with Bret "Hit Man" Hart, Dynamite Kid and Davey Boy Smith when Mr. McMahon purchased Calgary Stampede. At this time, the foursome would split up into two tag teams — Bulldog and Dynamite becoming The British Bulldogs and Hart and Anvil becoming The Hart Foundation. The two duos competed in amazing matches throughout the mid-80s with both teams capturing the World Tag Team Championship on separate occasions.

Eventually, The Hart Foundation parted ways and Neidhart teamed up with another brother-in-law — Owen Hart. Often times during the early '90s, Anvil and Owen would be at odds with "Hit Man," but the family joined forces again when a new Hart Foundation was formed in 1997. Consisting of Neidhart, Bret, Owen, Davey Boy Smith and Brian Pillman, this faction was wildly pro-Canadian and often stirred crowds into a frenzy with their anti-American rants.

After the infamous events of Survivor Series 1997, Neidhart joined "Hit Man" when he left WWE for World Championship Wrestling. In WCW, Anvil formed a tag team with The British Bulldog, but the two big men experienced little success in the mismanaged promotion.

Today, Neidhart still competes occasionally on the independent circuit, but his legacy truly lives on through his daughter, Natalya. As one of sports-entertainment's top female competitors, the former Divas Champion brings all of her father's strength and talent to the ring with some beauty thrown in for good measure.