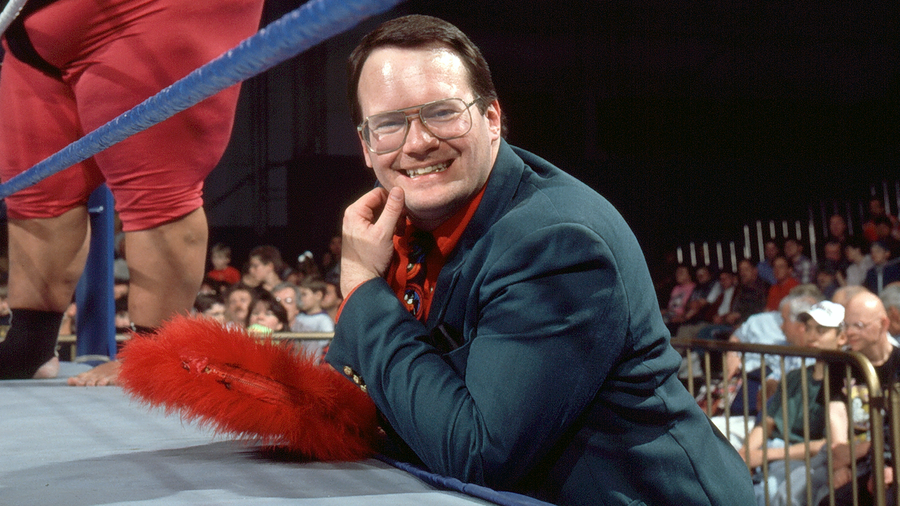 Perhaps the most obnoxious manager in wrestling history, Jim Cornette was never at a loss for words. When he wasn’t making his foes’ ears ring with a screeching diatribe, the Louisville, Ky., native was whacking his opponents with the trusty tennis racket that never left his hand.

Cornette broke into the wrestling business in the early ‘80s as a photographer, announcer and magazine writer in Memphis. Deciding to become a manager, he told the world that he had the backing of his very wealthy mama.

“The Louisville Slugger” also wanted the biggest spotlight on himself, so he joined WWE in 1993. Camp Cornette quickly came to include Yokozuna, Owen Hart, British Bulldog and the unruly Mastodon, Vader. Cornette and his charges were a consistent thorn in the sides of WWE Champions like Diesel and Shawn Michaels.

After becoming an announcer in 1997, he also took up arms against those who undermined the wrestling business. Cornette got on his soapbox in a series of Keith Olbermann-esque monologues on Monday Night Raw, punctuated by an almost-unneeded statement: “I’m Jim Cornette and that’s my opinion.”

Though Cornette was out of WWE rings by 1999, he still had a hand in many Superstars’ careers. Cornette helped establish Ohio Valley Wrestling as a WWE developmental territory, bringing future WWE Superstars to his hometown. At OVW, Cornette fostered talent that went on to become multiple-time World Champions, including Batista, Brock Lesnar, Randy Orton and John Cena.

Who would have thought that Mama Cornette’s investment in her baby boy would still be felt in the WWE Universe today?