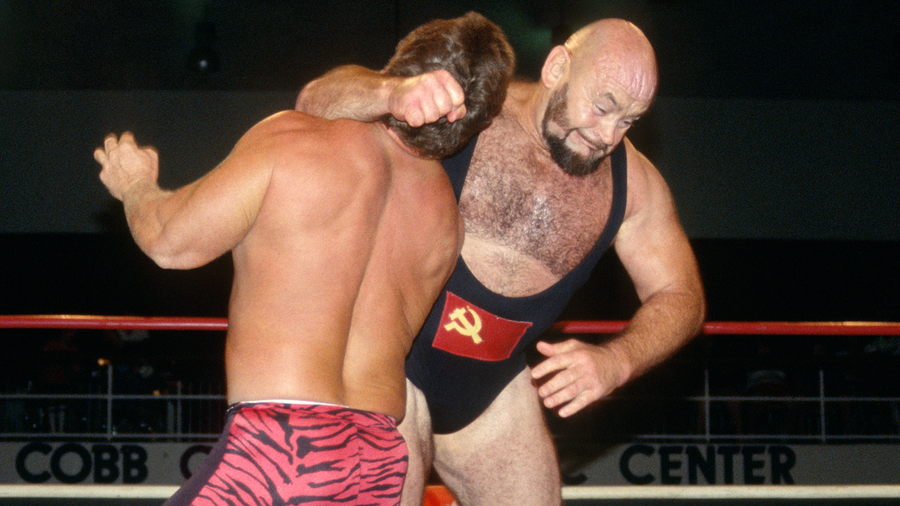 Every hero needs a villain, and for Bruno Sammartino in WWE’s golden age, that evil was manifested in Ivan Koloff. During Koloff’s reign of terror in the 1970s and ’80s, the Cold War between the United States and the Soviet Union reached a fever pitch, and “The Russian Bear” took full advantage of Americans’ fears by decimating their ring idols.

On Jan. 18, 1971, only months after Koloff’s WWE debut, he created one of the company’s most infamous moments. In front of a sold-out Madison Square Garden crowd of nearly 22,000, Koloff ascended to the top turnbuckle and dove onto the WWE Champion, Sammartino. His knee crushed onto Bruno’s throat, and “The Russian Bear” covered the Italian powerhouse to score a stunning three-count. Suddenly, the screaming New Yorkers in attendance fell eerily silent. The feared Soviet ended Bruno’s record-setting seven-year title reign. To this day, some longtime fans still can’t believe it happened.

Bruno attempted to gain a measure of retribution as he and Koloff battled back and forth for much of the following decade, including in Madison Square Garden’s first-ever Steel Cage Match in 1975. The two seemed evenly matched, with each notching several victories in their long and mostly unsettled rivalry.

Between the diving knee drop and his painful bearhug, the dangerous "Russian Bear" was able to attack all of his adversaries from the canvas or the air, and he was successful in nearly every major organization that was in operation during his career. After defeating stars like Bruno, Bob Backlund and Gorilla Monsoon in WWE, he joined the AWA, where he battled the company’s star, Verne Gagne, at Soldier Field in Chicago. At the Superdome in New Orleans, he faced off with Dusty Rhodes for Mid-South Wrestling. But it was in NWA that the menacing Koloff found his most notable, prolonged success.

As a member of The Russians, alongside his nephew Nikita Koloff and Krusher Khruschev, Ivan terrorized the Mid-Atlantic region of the NWA by competing against beloved tag teams like The Road Warriors, The Rock ’n’ Roll Express and The Fabulous Freebirds. He became the master of the Russian Chain Match, a devastating type of bout that left any fighter bludgeoned and bruised.

In the 1990s, Koloff’s reputation as a ring legend was finally recognized. He evolved into a lauded fan favorite, and used his veteran status to help launch new organizations, including competing in the main event of Smoky Mountain Wrestling’s first episode of television. And in the early days of ECW — then known as Eastern Championship Wrestling — Koloff competed against the promotion’s rising stars like The Sandman.

After finally hanging up the hammer and sickle-emblazoned boots for the final time in the mid-90s, “The Russian Bear” left behind one of the most decorated careers of all time. But while he might be recognized as a legend now, during his heyday, he was remembered for one thing: Ivan Koloff defeated Bruno Sammartino.