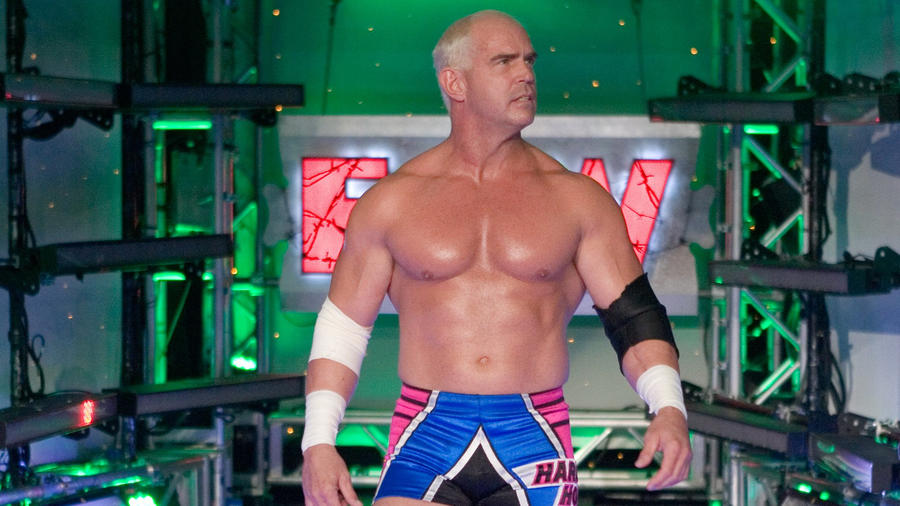 From the larger-than-life personas of the early ’90s to the wild brawls of The Attitude Era, Bob Holly’s long WWE career was emblematic of the eras it spanned. But after 15 years spent evolving on sports-entertainment’s grandest stage, there’s no doubt that Holly was one thing: Hardcore.

Thurman “Sparky” Plugg debuted in the 1994 Royal Rumble Match as a stock car driver taking a break from the racetrack to grapple with WWE Superstars. The moniker was soon abandoned in favor of a name he would retain for the remainder of his WWE tenure: Bob Holly.

Holly got his first taste of championship gold in ’95 when he joined forces with The 1-2-3 Kid to win the vacant World Tag Team Championships. The team was short-lived and Holly turned to the shrill loudmouth Jim Cornette, who was gathering a group of old-school competitors to form a National Wrestling Alliance cadre within WWE. Teaming with “Bodacious” Bart Gunn as The New Midnight Express, “Bombastic” Bob scored the NWA Tag Team Championships.

When that partnership crumbled, Holly re-emerged with a blond crewcut as one of the early stars in WWE’s burgeoning Hardcore Championship division. Changing his name to Hardcore Holly, the nasty brawler held the title on six occasions and established his on-screen persona as one of the toughest men in WWE — a fact the locker room was already well familiar with. He also exchanged the title with his cousin Crash, with whom Holly defeated The Rock ‘n’ Sock Connection to win the World Tag Team Championships.

In 2002, Holly brought his toughness to SmackDown and engaged in his most high-profile rivalry to date. Caught in Brock Lesnar’s massive clutches, The Alabama Slammer refused to simply admit defeat. Lesnar slammed Holly onto the canvas, breaking Hardcore’s neck. Holly was on the shelf for more than a year, and eventually came up short in a match for Lesnar’s WWE Championship at the Royal Rumble 2004, exactly 10 years after his WWE debut.

Possessing one of the highest levels of seniority in the organization, Holly was a respected member of the relaunched ECW brand and handed CM Punk his first loss in WWE. After moving to SmackDown, Holly became a mentor to young rookie Cody Rhodes, with whom Holly won his third World Tag Team Championship. The unlikely pair impressively held onto the titles for more than six months, culminating in the pupil turning on his teacher at Night of Champions 2008. The shocking betrayal turned out to be Holly’s swan song in the company, and his 15-year career in WWE ended shortly thereafter.