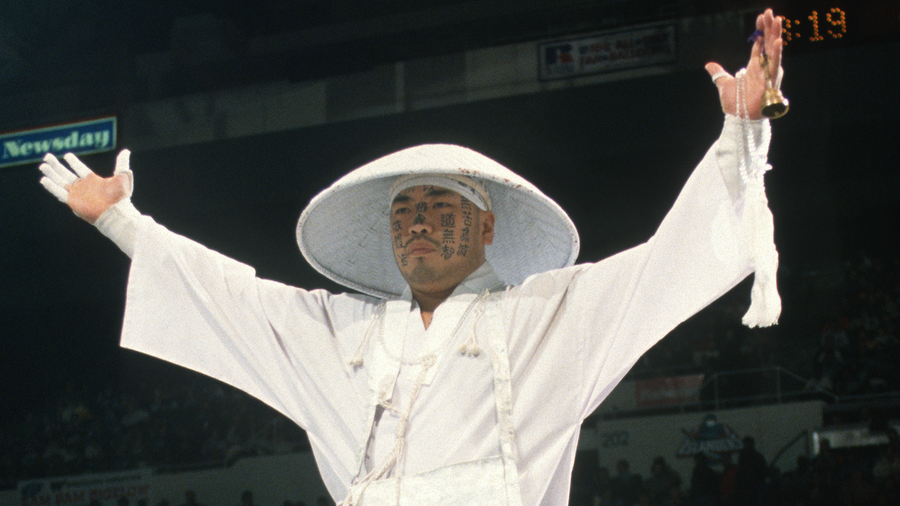 As enigmatic as he was innovative, Hakushi captivated WWE fans with his unique look and breathtaking offense during a brief stint in the mid-90s.

The mysterious Japanese Superstar made his first WWE appearance on the Jan. 9, 1995, edition of Raw. Accompanied to the ring by a bizarre white-faced adviser named Shinja, Hakushi cut an impressive figure in all white ceremonial Japanese dress. But when he removed his conical hat and delicate robes to reveal a body that was covered from head to toe in Japanese script, he made an impression that few WWE fans would forget.

Described by Shawn Michaels as the “greatest Japanese wrestler,” Hakushi quickly disposed of a young Matt Hardy in his debut match with a mix of blistering martial arts strikes and spectacular aerial maneuvers. The silent competitor’s status quickly rose from there as he found the ultimate rival in Bret “Hit Man” Hart. Although the Superstars’ styles differed greatly, the two men had a series of fantastic matches, including an underrated classic at the inaugural In Your House pay-per-view event.

Hakushi went on to beat The 1-2-3 Kid in an outstanding contest at SummerSlam 1995 that was ahead of its time in terms of the speed and agility both Superstars displayed. Unfortunately, the Japanese competitor stumbled from there. A tag team with Kwang went nowhere quickly while a loss to perennial also-ran Barry Horowitz left the once promising talent looking like a lost cause.

The ghostly Superstar left WWE in 1996 after being whacked with a branding iron by JBL, but he re-emerged for a one-night-only appearance in ECW in 1998. Teaming with respected Japanese flier Hayabusa, Hakushi — then competing under the name Jinsei Shinzaki — stole the show in a thrilling bout against the duo of Rob Van Dam & Sabu.

Sightings of Hakushi in North America have been exceedingly rare since that night, but the deeply spiritual competitor remains an esteemed ring presence in his home country.