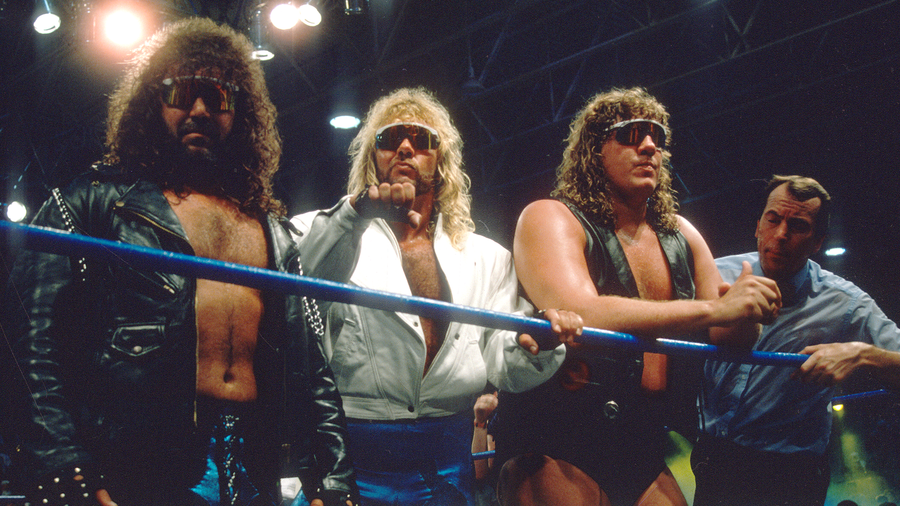 Formed in 1979, Michael “P.S.” Hayes, Terry “Bam Bam” Gordy and Buddy “Jack” Roberts ushered in a new era in sports-entertainment. Never before had three competitors formed a tag team, thus when they won the NWA National Tag Team Titles in Georgia Championship Wrestling, “The Freebird Rule” was established. Under this stipulation, any combination of the group’s members could defend the tag team championships, not just the duo that won them.

After a string of successes in Georgia, The Freebirds moonwalked their way into the Texas-based World Class Championship Wrestling and embarked on a legendary rivalry with the fabled Von Erich family. During this time, the group’s leader, Michael Hayes, recorded a song entitled “Badstreet, U.S.A.” that The Freebirds used as an entrance theme. Although they originally entered the ring to Lynyrd Skynyrd’s aptly titled “Freebird,” Hayes’ new track would pioneer the use of individual and original entrance themes for competitors.

The Freebirds became a force to be reckoned with in WCCW. They were brutal in their tactics and also in their attitudes toward their opponents. Their “bad guy” attitudes helped them win the Six-Man Tag Team Titles six times and the NWA American Tag Team Titles. Roberts also became WCCW Television Champion and Gordy held the NWA American Heavyweight Title. And it was during this time that The Freebirds added a fourth member, Jimmy “Jam” Garvin who would become Hayes’ frequent tag team partner.

Upon leaving WCCW, The Freebirds briefly joined WWE as part of Cyndi Lauper’s Rock ‘n’ Wrestling Connection. Their tenure was short-lived as they joined AWA, followed by UWF, where their tag team success continued, twice capturing the titles. While competing in UWF, however, The Freebirds once again enjoyed singles success when Buddy Roberts became UWF Television Champion and Terry Gordy won the UWF Heavyweight Championship.

The Freebirds eventually returned to WCCW before Hayes and Gordy made their way to NWA/WCW. It was during their time in WCW that Hayes and Garvin’s popularity as The Freebirds rose to new heights. The flashy duo twice captured the WCW Tag Team Championships, United States Tag Team Championships, and the short-lived WCW Six-Man Tag Team Titles along with a masked competitor named “Badstreet.”

Eventually, The Freebirds disbanded, but their impact on sports-entertainment is extraordinary. Not only did they revolutionize “The Freebird Rule,” later implemented by groups like Demolition, The nWo Wolfpac and The Spirit Squad, but they were also the innovators of using an entrance theme. To this day, few tag teams and trios can match the flash and innovation of The Fabulous Freebirds.