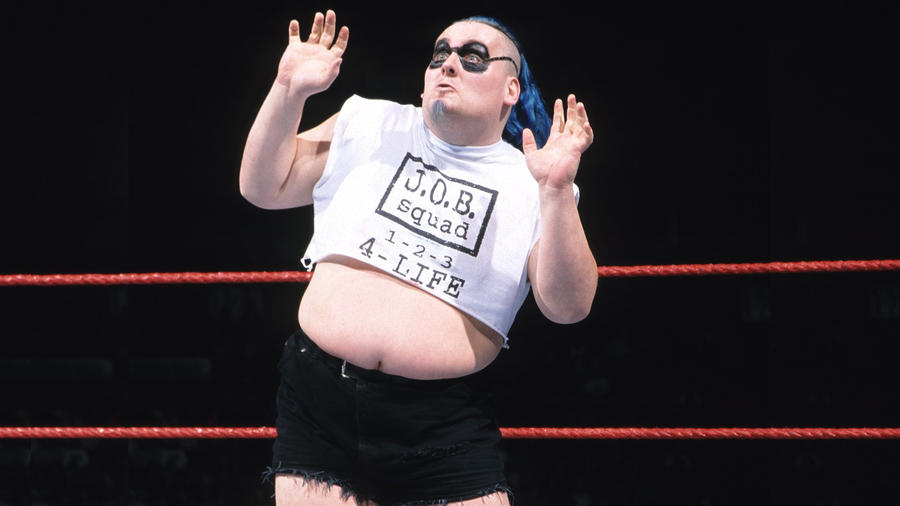 Up in the sky! It’s a bird. It’s a plane. It’s a 300-pound man with a blue Mohawk mullet, face paint and a half-shirt, executing a perfect moonsault. It’s The Blue Meanie!

The once-asthmatic little boy from Philadelphia who couldn’t play sports was noticed by Stevie Richards and Raven as a fan at an ECW event. He was recruited to be the flunky of Richards, who was already the flunky of Raven. Taking the name and look of the villain from the 1968 animated Beatles film “Yellow Submarine,” Stevie’s sidekick became The Blue Meanie.

Meanie made his mark in ECW when he stepped out as “Da Blue Guy” alongside “Big Stevie Cool” and “Hollywood” Nova in the hilarious New World Order parody known as The Blue World Order. Paralleling the popularity of the iconic nWo shirt, the bWo’s tee became the best-selling in ECW history.

Always defying the odds, The Blue Meanie went on to enjoy a combined five years in ECW and WWE. Along the way, he scored cameos in the WB series “Nikki,” as well as several horror films and the award-winning movie “The Wrestler,” starring Mickey Rourke. Meanie still wrestles today when he’s not training future Superstars at the world-famous Monster Factory in New Jersey.