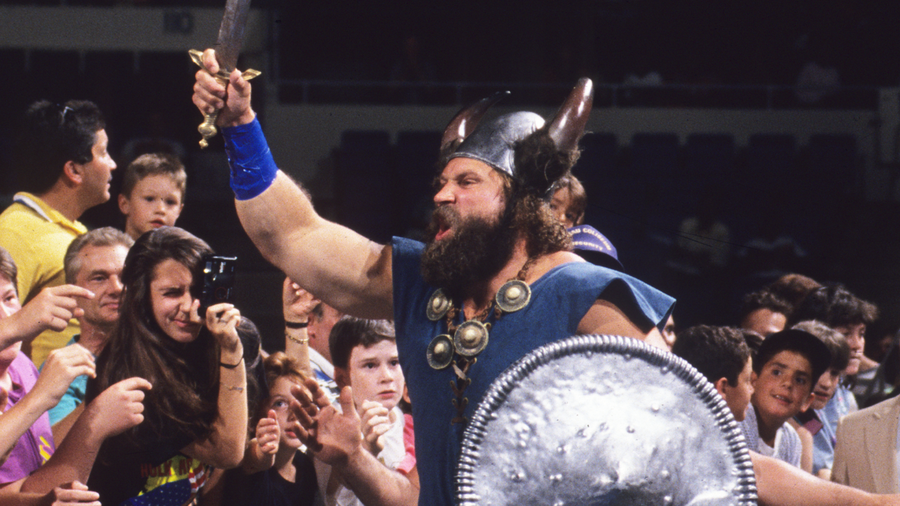 There have been many unusual competitors throughout WWE’s history, but few have been as strange as The Berzerker.

Stomping to the ring clad in a tunic and horned helmet while carrying a shield and sword that glistened in the spotlight, The Berzerker looked like he belonged at the helm of a Viking warship — not in the squared circle.

Regardless of appearances, the fierce warrior was ruthless in the ring. Though he dropped his blade and armor before the bell, his ruthlessness never stopped. The Berzerker pummeled his opponents mercilessly, steamrolling over them like his Viking ancestors stormed through European villages.

When his hunger for destruction was sated, the hirsute madman never considered pinning his foes. Instead, he opted to toss them over the top rope and take a count-out victory as he frantically bounced back and forth off the ropes. That unique strategy came in handy in a 40-Man Battle Royal in July 1992, which he easily won.

The only person who could seemingly control the Norseman was Mr. Fuji. However, the devious manager’s lust for chaos often eclipsed his willingness to control The Berzerker. The two famously demonstrated a sacred ritual, nearly burning the hapless nerd Jameson at the stake before tossing the poor sap off the roof of WWE’s TV studios.

During a brief rivalry with The Undertaker, The Berzerker and Fuji promised a Viking funeral for The Deadman. When they met one-on-one, though, the bout broke down into pandemonium. The Phenom narrowly avoided being impaled on the Viking’s mighty sword, but was laid out with a piledriver on the concrete floor.

Though The Berzerker was a vicious competitor, he also loved to party. In a memorable Coliseum Video segment, the madman showed the WWE Universe his way of throwing a shindig. Not quite understanding the intricacies of party planning, The Berzerker unwittingly kidnapped attendees for his bash, carrying them off while calling it “an invitation.” The Viking prepared finger foods literally, shoving his massive paws into peanut butter and smearing it all over a loaf of Wonder Bread.

While his hosting abilities may have left the WWE Universe in stitches, once the bell rang and it was time to fight, there was no competitor more feared than The Berzerker.